As the old song went, “when the giver gives, he tears the roof and gives”.

Last week the Government of Karnataka released its report on the covid-19 serosurvey done in the state. You might recall that it had concluded that the number of cases had been undercounted by a factor of 40, but then some things were suspect in terms of the sampling and the weighting.

This week comes another sero-survey, this time a preprint of a paper that has been submitted to a peer reviewed journal. This survey was conducted by the IDFC Institute, a think tank, and involves academics from the University of Chicago and Duke University, and relies on the extensive sampling network of CMIE.

At the broad level, this survey confirms the results of the other survey – it concludes that “Overall seroprevalence in the state implies that by August at least 31.5 million residents had been infected by August”. This is much higher than the overall conclusions of the state-sponsored survey, which had concluded that “about 19 million residents had been infected by mid-September”.

I like seeing two independent assessments of the same quantity. While each may have its own sources of error, and may not independently offer much information, comparing them can offer some really valuable insights. So what do we have here?

Clearly, since these surveys measure the number of people “who have ever been affected”, both of them cannot be correct. If 31 million people had been affected by end August, clearly many more than 19 million should have been infected by mid-September. And vice versa. So, as Ravi Shastri would put it, “something’s got to give”. What gives?

Remember that I had thought the state survey numbers might have been an overestimate thanks to inappropriate sampling (“low risk” not being low risk enough, and not weighting samples)? If 20 million by mid-September was an overestimate, what do you say about 31 million by end August? Surely an overestimate? And that is not all.

If you go through the IDFC-Duke-Chicago paper, there are a few figures and tables that don’t make sense at all. For starters, check out this graph, that for different regions in the state, shows the “median date of sampling” and the estimates on the proportion of the population that had antibodies for covid-19. 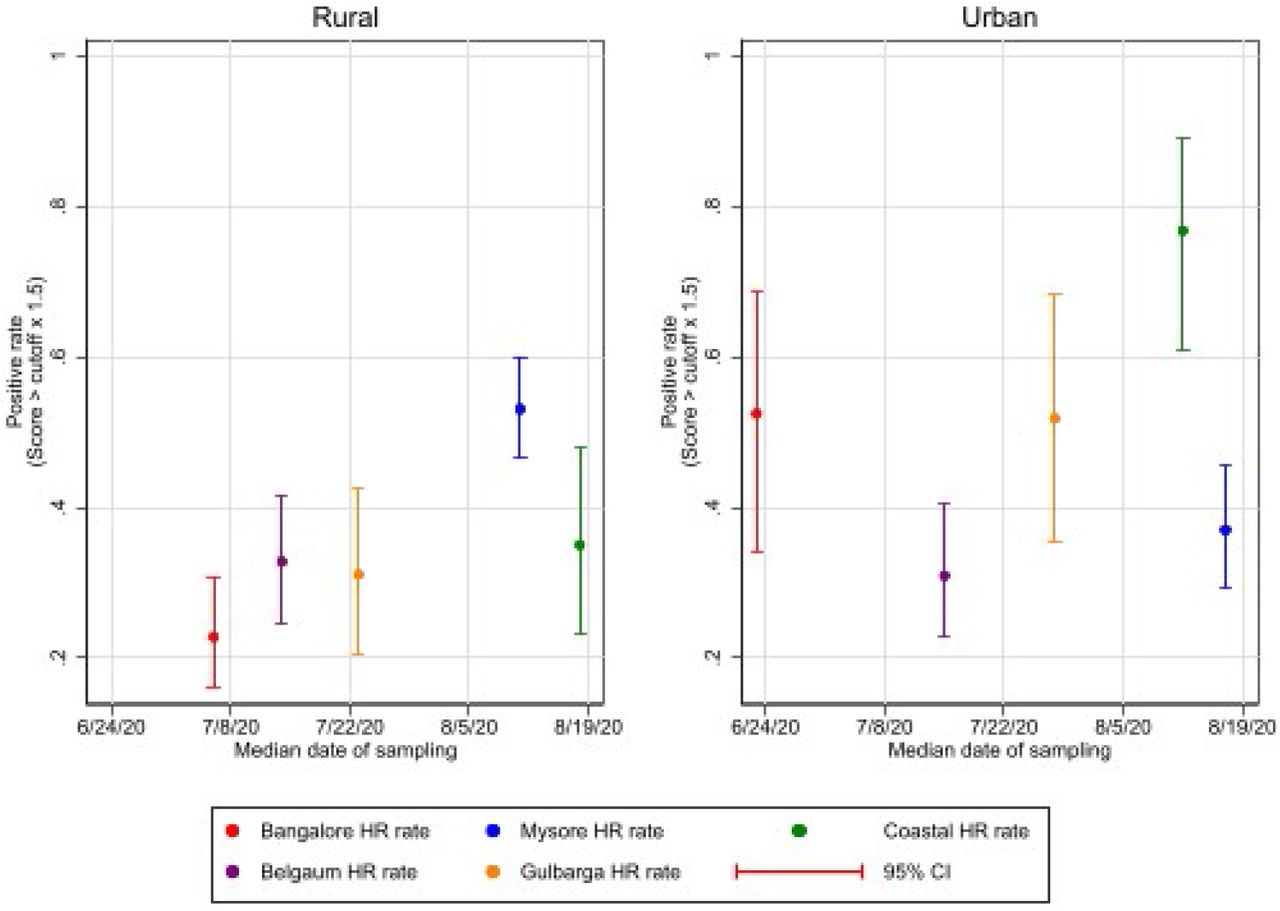 Check out the red line on the right. The sampling for the urban areas for the Bangalore region was completed by 24th June. And the survey found that more than 50% of respondents in this region had covid-19 antibodies. On 24th June.

The state survey had estimated that known cases were 1 in 40. 12500 confirmed cases suggests about 500,000 actual cases. That’s 5% of Bangalore’s population, not 50% as the survey claimed. Something is really really off. Even if we use the IDFC-Duke-Chicago paper’s estimates that only 1 in 100 cases were reported / known, then 12500 known cases by 8th July translates to 1.25 million actual cases, or 12.5% of the city’s population (well below 50% ).

My biggest discomfort with the IDFC-Duke-Chicago effort is that it attempts to sample a rather rapidly changing variable over a long period of time. The survey went on from June 15th to August 29th. By June 15th, Karnataka had 7200 known cases (and 87 deaths). By August 29th the state had 327,000 known cases and 5500 deaths. I really don’t understand how the academics who ran the study could reconcile their data from the third week of June to the data from the third week of August, when the nature of the pandemic in the state was very very different.

And now, having looked at this paper, I’m more confident of the state survey’s estimations. Yes, it might have sampling issues, but compared to the IDFC-Duke-Chicago paper, the numbers make so much more sense. So yeah, maybe the factor of underestimation of Covid-19 cases in Karnataka is 40.

Putting all this together, I don’t understand one thing. What these surveys have shown is that

So why do we still have a (partial) lockdown?

PS: The other day on WhatsApp I saw this video of an extremely congested Chickpet area on the last weekend before Diwali. My initial reaction was “these people have lost their minds. Why are they all in such a crowded place?”. Now, after thinking about the surveys, my reaction is “most of these people have most definitely already got covid and recovered. So it’s not THAT crazy”.

One thought on “More on Covid-19 prevalence in Karnataka”