Different languages have different levels of polymorphism, and it is a function of the environment in which the language developed. I discovered this last night when someone wrote on twitter that there is no word in Tamil for snow:

It is so hot in chennai there is no word for snow in Tamil.

That got me thinking as to whether Kannada has a word for snow. Thinking of words for all the super-rain things in Kannada, I figured that “hima” is the word for fog, and “manju” means mist. But there is no word for snow in Kannada!

I put up the question on twitter, and the answers again were variations of the list I’ve put up earlier – some suggested “hima”, others “hani” (means “drops”, as in “raindrops”). One suggested “tushaara” for snow, but it’s not a commonly used word, so while it might be valid, I was looking for more commonly used words.

It then dawned on me that like the Tamil country, “solid rain” (apart from hailstones – which has its own Kannada word Anekal – translates to “elephant stone”) is not all that common in the Kannada country too. Yes, the Kannada country is cooler than Tamil country, and “solid rain” does happen, but it doesn’t happen on a regular enough basis for each type to have a word of its own. So, while I might think that “hima” is fog (since that’s the context in which it’s used in Bangalore), it also stands for “snow”! It’s all solid rain, and since it’s not all that common, you can have one word that describes it all! Interestingly, I can’t think of a Kannada word for “ice” also (again I haven’t learnt Kannada formally, though I speak the language at home. So what i know is the everyday spoken language)!

On a different note, in Japanese, the same word “Ao” is used to describe both blue and green! I’m again not sure if this because Japanese people are blue-green colour-blind, but the level of polymorphism in colour is interesting. At the other end of the scale, Italian has at least three words to describe different shades of blue (my knowledge of Italy, and Italian, I must mention, is mostly from football).

First, you have “celesti” or sky blue, as in the Biancocelesti of Lazio: 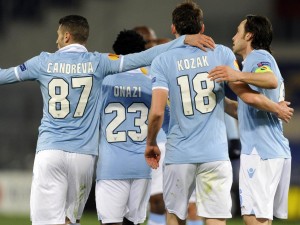 Then you have the blue of the sea or “azzure”, as in Inter Milan’s Nerazzuri. And finally, the word “Blu” is used for dark blue, as in Genoa’s Rossoblu.

As if all this was not enough, they have Viola for purple!

It is interesting how different languages use different levels of polymorphism for different things!

2 thoughts on “Levels of polymorphism”