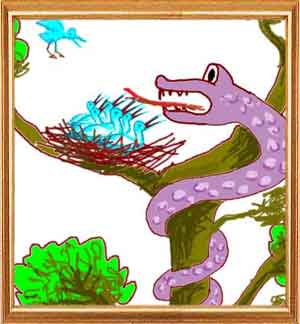 I have several favourite stories from the Panchatantra (which perhaps explains my lack of appreciation of modern children’s fiction). One of them involves a crane and a mongoose. And I think it is a good lesson on when and where to call for regulation, and government or legal intervention.

So the story goes like this. A snake lives at the bottom of the tree where a crane has built its nest. Each time the crane lays eggs, the snake slithers up the tree and devours them. And the crane doesn’t know what to do. Ultimately it receives some “brilliant advice”.

There is a mongoose living somewhere nearby, and the crane lays out a Hansel-and-Gretel like path of fish from the mongoose’s house to the snake’s house. The mongoose duly follows the trail of fish and finishes off the snake. The next day, the mongoose is hungry again, and it climbs up the tree and devours the crane’s eggs.

It is common political discourse nowadays to call for the government’s or court’s intervention to solve what seems to be private problems. The governments and courts are of course happy to oblige – any new source for intervention and rent-seeking are good news for the people involved. And then you get a solution that temporarily solves the problem (slaughtering the snake). And then in the long term, what you get is a bigger problem (mongoose eating the crane’s eggs). The only difference is that in real life it is not just the crane that gets negatively affected – the regulations hurt everyone.

The examples that come to my mind at this point in time are all “local”. Some residents in Indiranagar in Bangalore weren’t happy about the noise from nearby pubs. They asked the government to “do something”. And the government “did something” – it banned the playing of live music in restaurants, killing off what was then a budding industry in Bangalore.

Some other residents somewhere else in Bangalore were unhappy that their neighbours had dogs that barked. They asked the government to do something. The government did something – coming up with an elaborate document to regulate dogs that people can own.

And there are more involved (and dangerous) examples of this as well.

One thought on “The Crane-Mongoose Theory of Public Policy”