During our IIMB days, Kodhi and I used to measure our lives in pinnacles. Pinnacles could come through various ways. Getting a hug from a sought-after person of the opposite gender usually qualified. Getting featured in newspapers also worked. Sometimes even a compliment from a professor would be enough of a “pinnacle”.

In any case, in college days pinnacles keep coming your way, and you can live your life from one pinnacle to another. Once you graduate, that suddenly stops. Positive feedback of any kind in your work life is rare. If you “manage to do well in social life”, it might work, but there is really nobody else to show off your pinnacle to. It is really hard to adjust to this sudden paucity of positive feedback in life, and this usually leads to what people call as “quarter life crisis”.

Shortly after I had resolved my quarter life crisis, and “done well in social life”, I decided to change track. I quit full time employment, and as you all might know, have been pursuing a sort of “portfolio life” in the last eight odd years. And this means doing several things apart from the thing that contributes to most of my income.

One upside of this kind of life (lack of steady cash flow is the big downside) is that you keep getting pinnacles. Publishing my book was a pinnacle, for example. Getting invited to write regularly for Mint was another. Becoming a bit of a social media star (nothing like yesterday) in the run up to the 2014 general elections was yet another. And there were the kicks about being invited to teach at IIMB. And all that.

It had been a while since I had one such pinnacle. Perhaps the last one was in 2018, during the Karnataka Assembly Elections, when I had my first shot at television punditry, when I appeared on News9, and waxed eloquent about sample sizes and survey techniques.

In any case, that was nothing compared to the sort of pinnacle that I’ve got following my tweetstorm from yesterday. This email came to the inbox of NED Talks (I didn’t know that email ID was public) this afternoon:

Sir,  we would like to get in touch with you for our show on Corona virus reality on Rahul Gandhi Claim that Lock down is temporary measures and not the solution to defeat virus and need more testing to be done in the country.

Sir,It will be our pleasure to have you join us on our channel at 9PM.

We, at Republic TV,  believe that your command over the issue will add depth and perspective to our discussions and help mould popular discourse.

As it happened, I was unable to accept this invitation. However, I’m documenting this here to record this absolute pinnacle of life. The next time I feel shitty about myself, or feel a sort of imposter syndrome, I can look at this invite and think that I’ve truly arrived in life.

PS: Just look at the number of times I’ve been called “Sir” in that email. That alone should constitute a pinnacle.

Those of you who might be following me on social media (Twitter/Facebook/LinkedIN) might know that I’ve started a career in TV Punditry over the last week. Well, it’s not that much of a career – I still need to figure out how to get paid for it.

Anyway, so I was on News9 once on Saturday (analysing exit polls) and again on Tuesday (analysing the election results). It happened pretty much at random, from a random twitter conversation:

yeah there till 28th. fix one election TV appearance for me 😛

And so Mathang (who I’d first met in 2004 when he had interviewed me for Education Times) set me up with Anil Kumar from News9, who presently asked me for my number. A couple of twitter DMs, a couple of emails and a couple of phone calls later, I had been asked to come to the News9 studio at 5pm on Saturday. 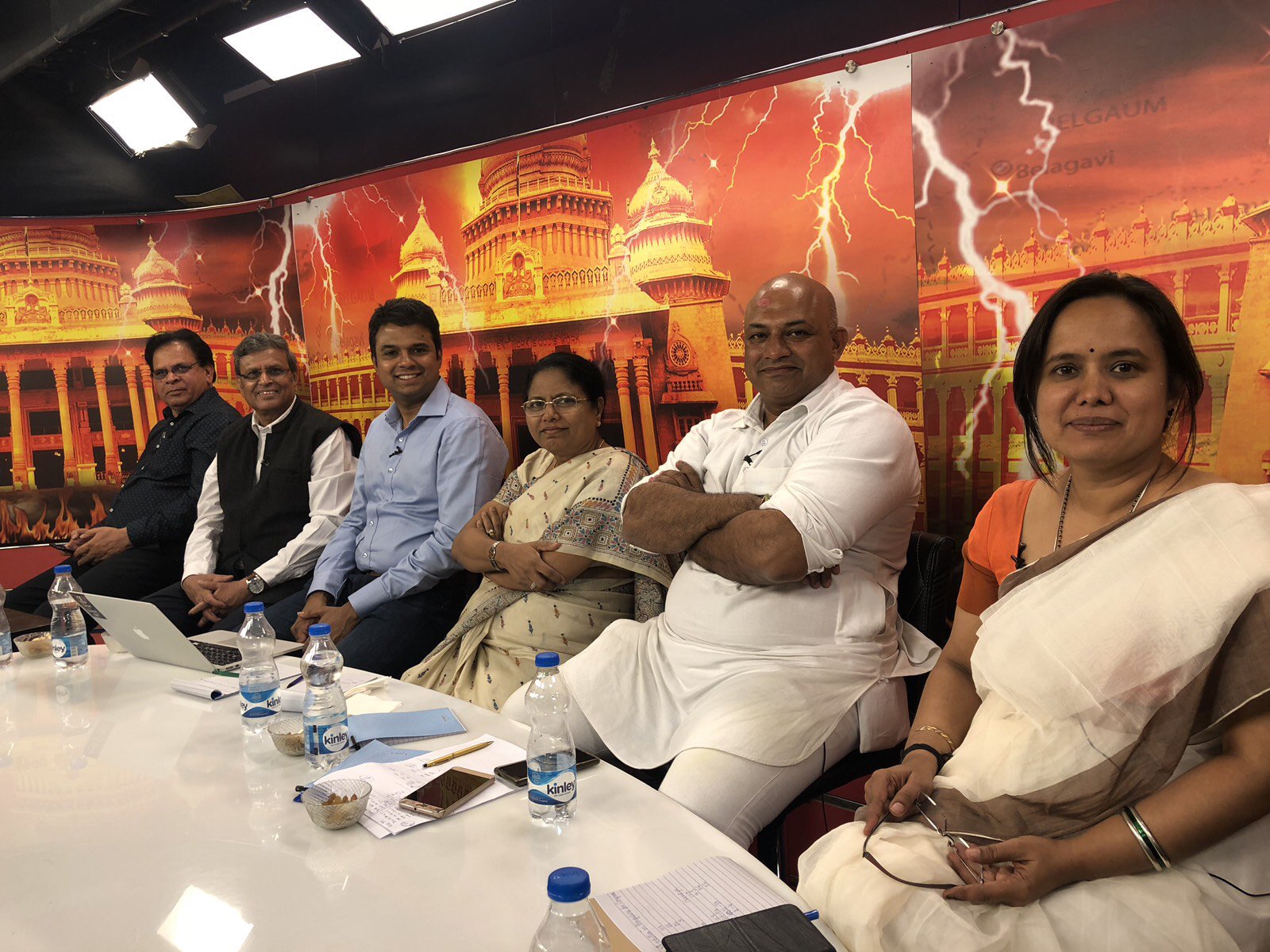 Saturday’s session was really enjoyable, and I spoke a fair bit on the process of conducting an exit poll, the importance of sample sizes and representative samples, the process of converting votes to seats, etc. A 5 minute monologue on sampling process got the anchors interested in me, and they kept coming back to me. As is my wont, I summarised the import of my arguments for Mint.

And so I got invited again for Tuesday’s post-counting session, and I’m not sure I enjoyed it that much. As the elections threw up a hung assembly, the politicians on the panel spent their time shouting at each other. I was seated in an inappropriate place – right between a loud JDS spokesperson and a loud BJP spokesperson. I recused myself from much of the discussion and was only brought in because the anchors probably thought I should be “given some lines” – an opportunity I used to comment on the parties’ election strategies.

So two TV appearances later, I must say I quite like the format – it’s good footage (literally) if not anything else, but it can be a bit painful. Writing is easy in the sense that you just collect your thoughts and deliver them at a time.

Video means that you are virtually participating in a group discussion, and need to butt in to make your point. You might have something insightful to say, but need to wait for an opportune time to interject. You might be in the middle of a long point but get interrupted by another panellist. You might wait for ages to say something but the opportunity never comes. At other times, you might get a question that you’re not prepared for.

The worst thing as an analytical guy on TV is that you need to keep referring to your data, and your analysis. So there was one occasion on each session when the anchors asked me a question to answer which I’d to write some code to answer. So each time I mumbled something and bent down to my laptop, and got bailed out by the anchor who got someone else’s view in the time I took to get the requisite data.

In any case, I want to do more of this. I also hope that like with my writing, I can some day hope to get paid for TV appearances – this is a hard job since panellists representing political parties don’t charge anything – it’s in their parties’ interests to be represented on the show.