On FiveThirtyEight, Nate Silver has a piece looking ahead to the Democratic primaries ahead of the presidential elections in the US next year. I don’t know enough about US politics to comment on the piece itself, but what caught my eye is the spider chart describing the various Democratic nominees. 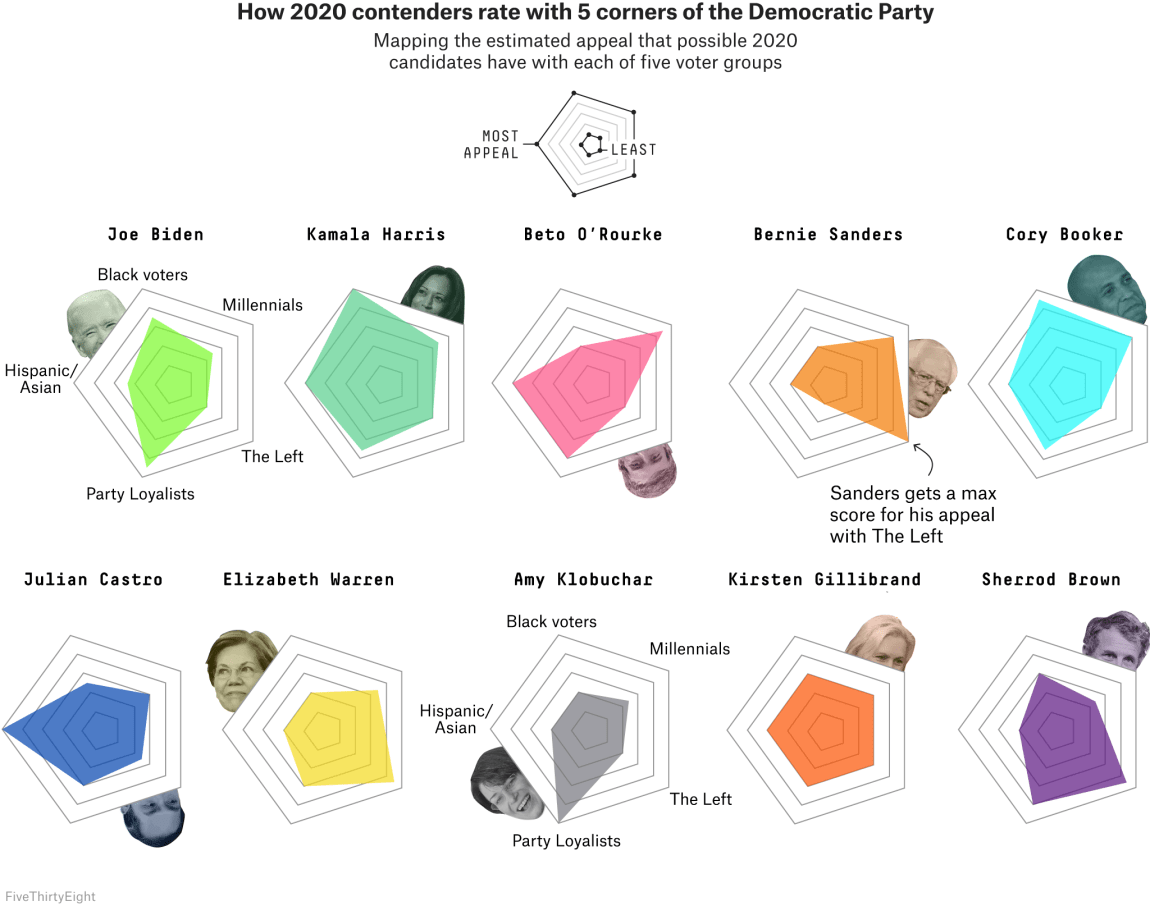 This is a standard spider chart that people who read business news should recognise, so the appearance of such a chart isn’t big news. What bothers me, though, is that a respected data journalist like Nate Silver is publishing such charts, especially in an article under his own name. For spider charts do a lousy job of conveying information.

Implicitly, you might think that the area of the pentagon (in this case) thus formed conveys the strength of a particular candidate. Leaving aside the fact that the human eye can judge areas less well than lengths, the area of a spider chart accurately shows “strength” only in one corner case – where the values along all five axes are the same.

I may not have that much insight into US politics, but it should be fairly clear that the ordering of the factors in this case has no particular sanctity. You should be able to jumble up the order of the axes and the information in the chart should remain the same.

The spider chart doesn’t work this way. If lengths of the “semidiagonals” (the five axes on which we are measuring) are

, the area of the polygon thus formed equals

. It is not hard to see that for any value of

, the ordering of the “axes” makes a material difference in the area of the chart.

Moreover, in this particular case, with the legend being shown only with one politician, you need to keep looking back and forth to analyse where a particular candidate lies in terms of support among the five big democrat bases. Also, the representation suggests that these five bases have equal strength in the Democrat support base, while the reality may be far from it (again I don’t have domain knowledge).

Spider charts can look pretty, which might make them attractive for graphic designers. They are just not so good in conveying information.

PS: for this particular data set, I would just go with bars with small multiples (call me boring if you may). One set of bar graphs for each candidate, with consistent colour coding and ordering among the bars so that candidates can be compared easily.

2 thoughts on “The problem with spider charts”