Catalunya, where I spent two weeks last month, votes today in an “informal referendum” on whether to secede from Spain. This vote is non-binding after the Spanish Supreme Court declared an earlier “official referendum” called by the Catalan government as illegal. As I write this (11 pm IST; 6:30 in Catalunya), FT reports that there were “long lines to vote” in the informal referendum today. The same report in the opening paragraph mentions “with an overwhelming majority expected to back a proposal to break away from the rest of the country and form an independent state“. 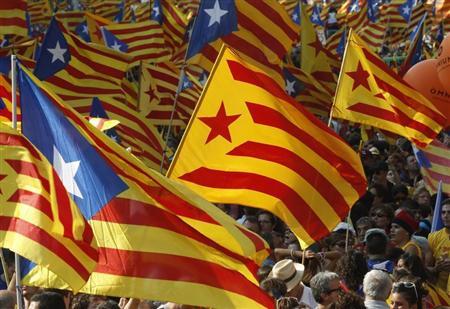 Looking at it from a pure numbers perspective, this outcome is not to be unexpected. Consider two hypothetical voters and Barcelona residents Jordi and Jorge (the more observant reader might observe that these names have been chosen carefully) who are respectively for and against the secession. What are their incentives to come out and vote today, as against in a “real referendum”?

As far as Jorge is concerned, today’s vote doesn’t matter to him. Given that today’s referendum is “informal”, which way it goes has, in Jorge’s opinion, absolutely no impact on his life. Thus, he will consider the time and energy he would have to expend in queueing up and voting today to be not worth it. And thus he will not bother. And get on with his life. If today’s referendum were “real”, though, Jorge would have every incentive to register his opposition in the hope that his vote would help tip the vote towards a “no”, and thus he would be voting.

What about Jordi? Even though Jordi knows that today’s vote is only “informal”, he wants to send out a statement that he is in favour of secession. The way he sees it, the larger the majority by which today’s vote will come out in support of secession, the stronger the message that will be sent to Madrid, which he hopes should sooner or later be forced to relent, and permit a real independence vote. As far as Jordi is concerned, today’s vote has tremendous signalling value, and to this end he has every incentive to expend his time and energy and queue up and vote!

Based on this more Jordis are likely to come out today to vote, while less Jorges are likely to do so. Which means that today’s vote, thanks to the selection bias of one side being much more disposed to vote than the other, is likely to throw up a skewed result! Thus, it makes sense to treat the results with some salt.

But what about higher order effects? It is not hard for Jordis and Jorges to see what I’ve written above. Knowledge of this is not likely to change Jordi’s stance – just “victory” in today’s referendum is not enough for him. He is using today’s vote to primarily make a statement and the larger the “majority” that can be shown in favour of a “Yes” vote, the better it is for him. So the second order effects will not affect Jordi.

What about Jorge? He understands that while his vote doesn’t really matter since today’s referendum is not real, he knows that most people in favour of the referendum are likely to be voting today. Thus, the referendum is going to show an inflated majority in favour of “Yes”. So should he vote today to balance things out? On the one hand the effort might be worth it in terms of reducing the majority for the “Yes” vote. But then again, Jorge will realise that the selection bias in today’s vote is very very apparent, and his effort in marginally reducing the majority in favour of “Yes” may not actually be worth it! And so he will not vote.

So it is clear that today’s vote will show a significant majority in favour of secession from Spain, but that this is likely to be vastly overstated and very different from what things would be like had today’s vote been real. In that sense, if Spanish Prime Minister Mariano Rajoy and his advisers are smart, and realise the selection bias that is inherent, they can render today’s “informal referendum” rather pointless.