For the last one year or so, ever since I started using IMPS at scale, and read up the UPI protocol, I’ve been bullish about Indian banks winning the so-called “payments battle”. If and when the adoption of electronic payments in India takes off, I’ve been expecting banks to cash in ahead of the “prepaid payments instruments” operators.

The events of the last one week, however, have made me revise this prediction. While the disruption of the cash economy by withdrawal of 85% of all notes in circulation has no doubt given a major boost to the electronic payments industry, only some are in a position to do anything about this.

The major problem for banks in the last one week has been that they’ve been tasked with the unenviable task of exchanging the now invalid currency, taking deposits and issuing new currency. With stringent know-your-customer (KYC) norms, the process hasn’t been an easy one, and banks have been working overtime (along with customers working overtime standing in line) to make sure hard currency is in the market again.

While by all accounts banks have been undertaking this task rather well, the problem has been that they’ve had little bandwidth to do anything else. This was a wonderful opportunity for banks, for example, to acquire small merchants to accept payments using UPI. It was an opportune time to push the adoption of credit card payment terminals to merchants who so far didn’t possess them. Banks could’ve also used the opportunity to open savings accounts for the hitherto unbanked, so they had a place to park their cash.

As it stands, the demands of cash management have been so overwhelming that the above are literally last priorities for the bank. Leave alone expand their networks, banks are even unable to service the existing point of sale machines on their network, as one distraught shopkeeper mentioned to me on Saturday.

This is where the opportunity for the likes of PayTM lies. Freed of the responsibilities of branch banking and currency exchange, they’ve been far better placed to acquire customers and merchants and improve their volume of sales. Of course, their big problem is that they’re not interoperable – I can’t pay using Mobikwik wallet to a merchant who can accept using PayTM. Nevertheless, they’ve had the sales and operational bandwidth to press on with their network expansion, and by the time the banks can get back to focussing on this, it might be too late.

And among the Prepaid Payment Instrument (PPI) operators again, PayTM is better poised to exploit the opportunity than its peers, mainly thanks to recall. Thanks to the Uber deal, they have a foothold in the premium market unlike the likes of Freecharge which are only in the low-end mobile recharge market. And PayTM has also had cash to burn to create recall – with deals such as sponsorship of Indian cricket matches. 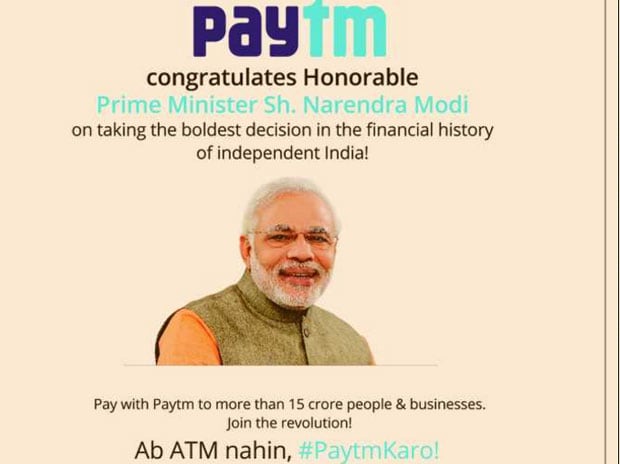 It’s no surprise that soon after the announcement of withdrawal of large currency was made, PayTM took out full page ads in all major newspapers. They correctly guessed that this was an opportunity they could not afford to miss.

PS: PayTM has a payments bank license, so once they start those operations, they’ll become interoperable with the banking system, with IMPS and UPI and all that.